We’ve developed a strong foundation for building charts from the ground up by specifying our defaults (data, and aesthetic mappings), and adding geom layers. In order to take our charts to the next level we need to familiarize ourselves with the other components of the Layered Grammar of Graphics: scales, coordinates, and facets.

For these examples we will again return to our commute dataset. We will also recreate the two columns hh_inc_quin and edu_attain.

Recall from Grammar of Layered Graphics I that when we supply our aesthetic mappings our axes are filled out automatically. 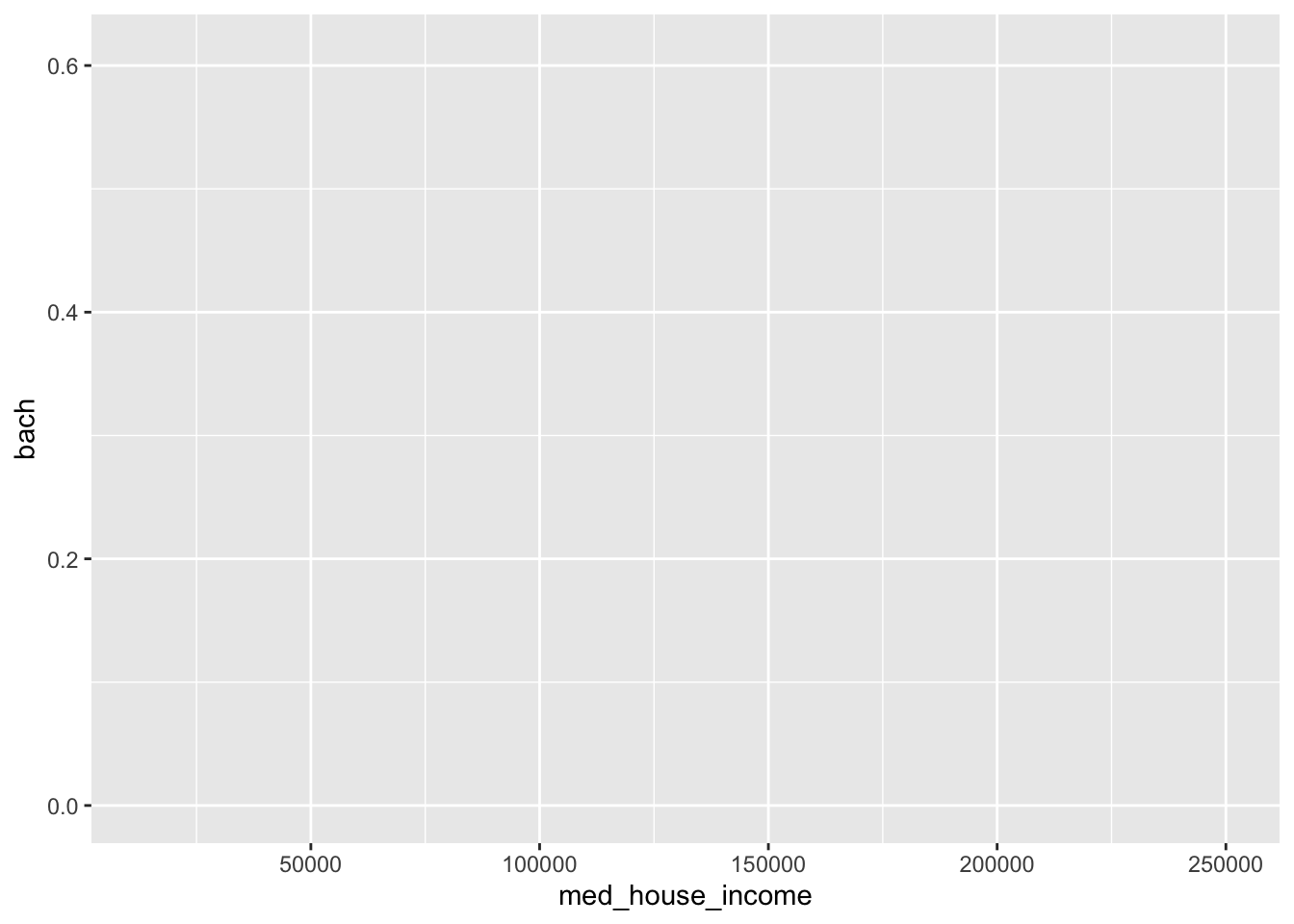 By specifying our defaults in the ggplot() call, we implicitly are providing the x and y axes. From those mappings, ggplot2 is able to identify the type of variable mapped to each aesthetic and its values. That inference makes it possible for us to plot without having to explicitly state what our axes are.

In the above chart, each column is being mapped as a continuous variable. We are able to manually specify what each scale type is by using the various scale_*_type() layers from ggplot2. These layers follow a general format of first specifying scale followed by which aesthetic we’re scaling, and what data type. For example, to change the med_house_income axis to a discrete axis we can apply the layer scale_x_discrete() 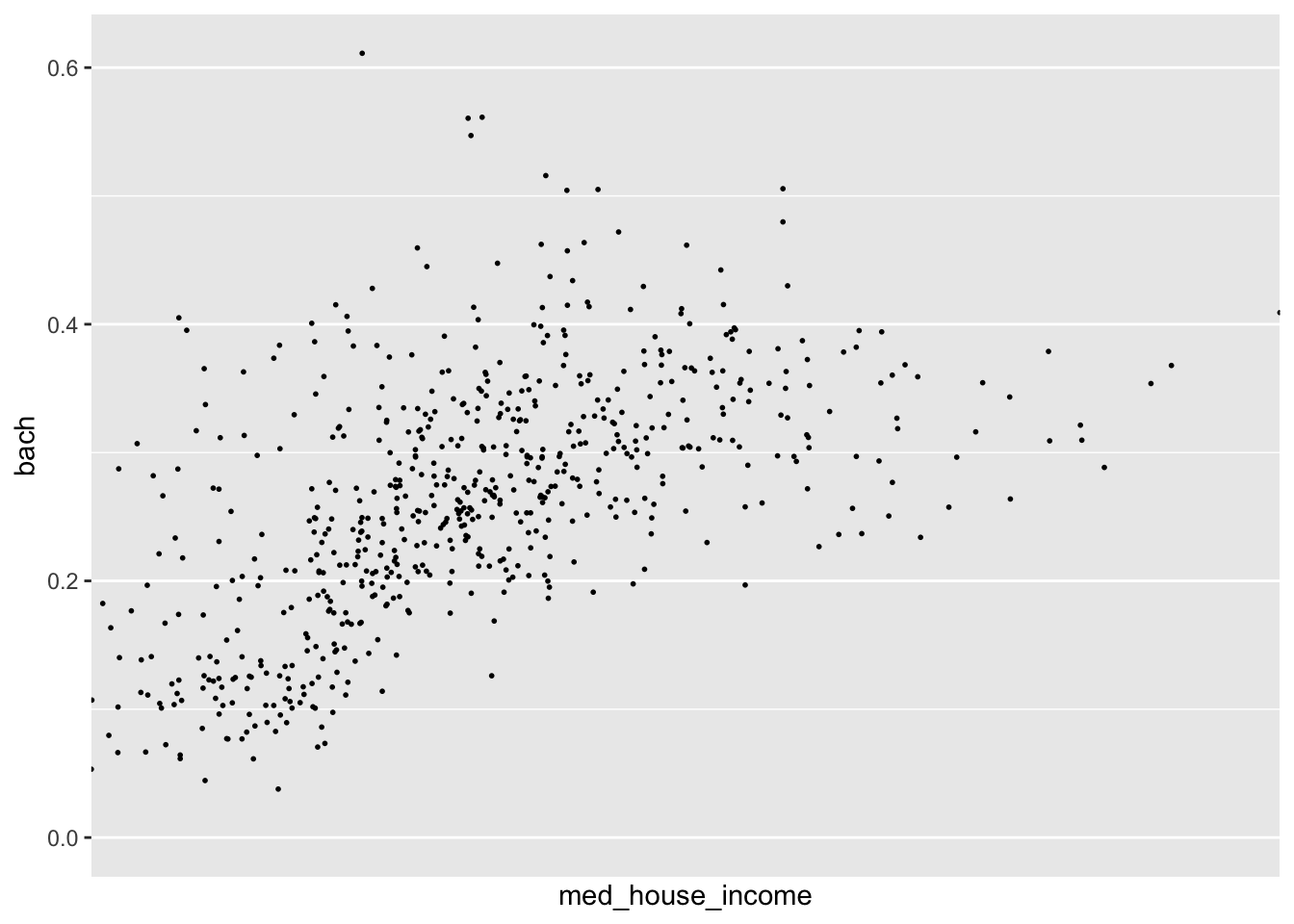 In doing so we have lost the axis labels! That is because ggplot2 considers both integers and floating point (numbers with decimals) as continuous and categorical variables as being discrete.

Nonetheless, we have a lot of functions at our disposal to alter the axes to our liking!

In our data exploration, we will come across non-normal distributions of data. For example income is almost always right skewed and displays some sort of log-normal-ish behavior. We may not want to actually change to underlying values of that variable, but want to apply transformations for the purposes of visualization. In those cases, we can apply scale transformations.

As an example, in our visualization of income and education there is a slight right skew to med_house_income. The graphic doesn’t justify a logarithmic transformation, but may benefit from a square root transformation. We can apply this with scale_x_sqrt(). 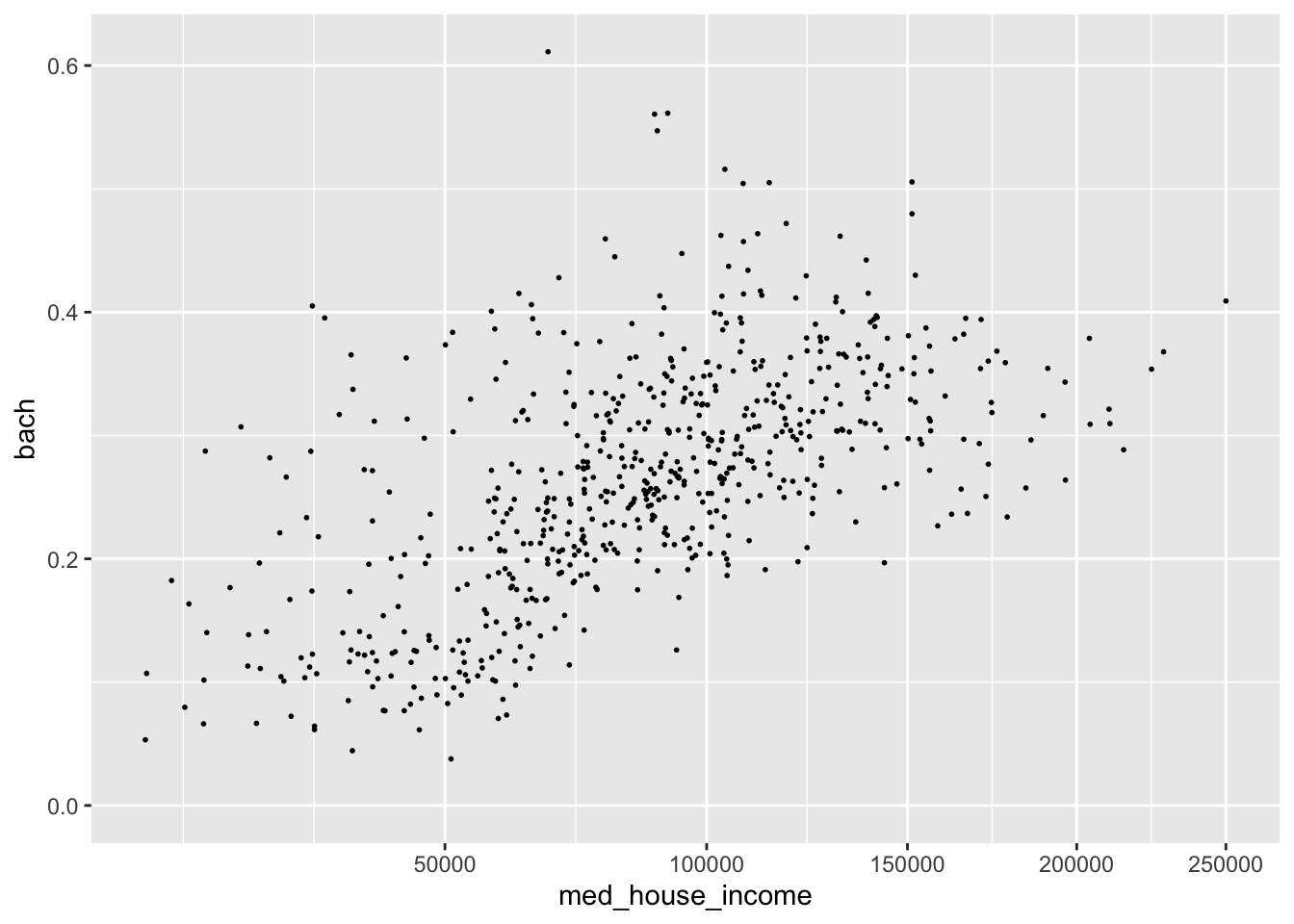 We can apply a log10 transformation as well with scale_*_log10(). 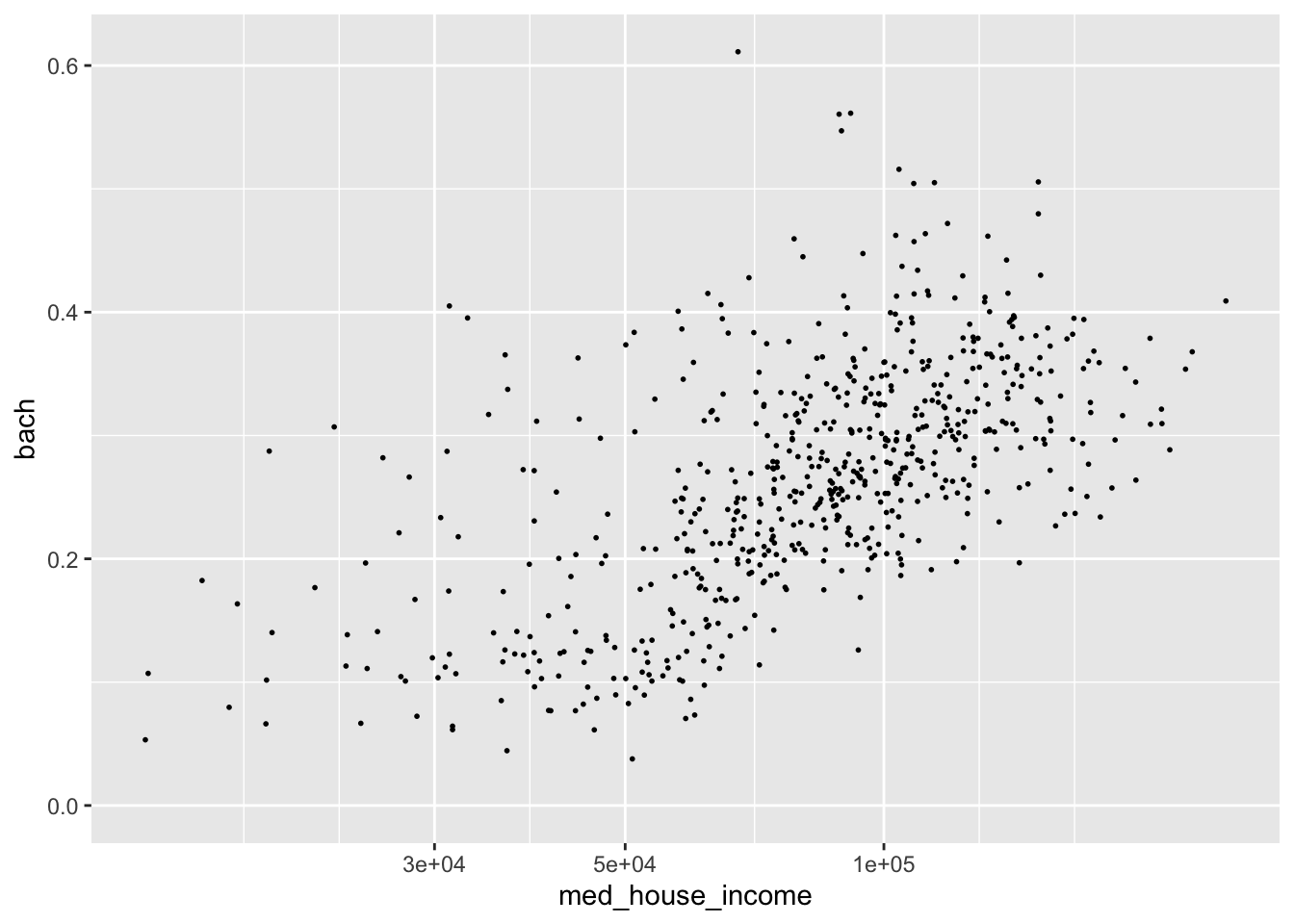 This is an over correction. The slight upward arch in the original plotting is now inverted. Nonetheless, I hope the point is made.

In addition to applying transformations, we will want to have more control over the limits of our graph. For example, say we want to have our y axis include all possible values of [0,1]. We can tell ggplot what range of values we want our axes to contain with lims(). lims() takes a name-value pair where the name is an aesthetic and the value is a numeric vector with two elements—the first being the value at the origin and the second being at the extent of the axis64. 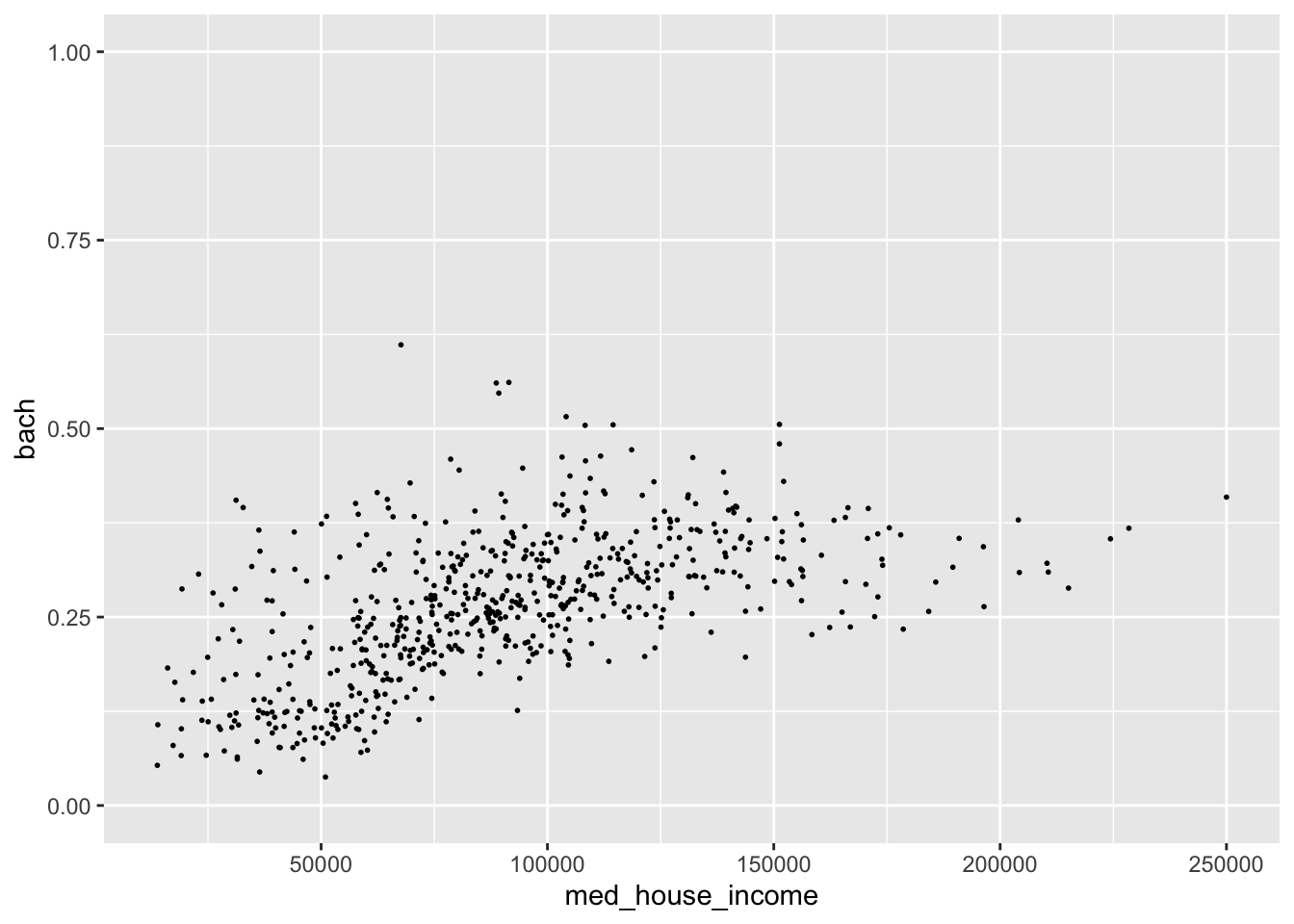 The graph we get we when expand our y axis limits definitely contains a bit too much white space. But by expanding the grid, we can see this sort of flattening out of education at around $150,000 while income still continues to increase. Perhaps if we omit those values, the relationship may seem even stronger. Let’s experiment with that. 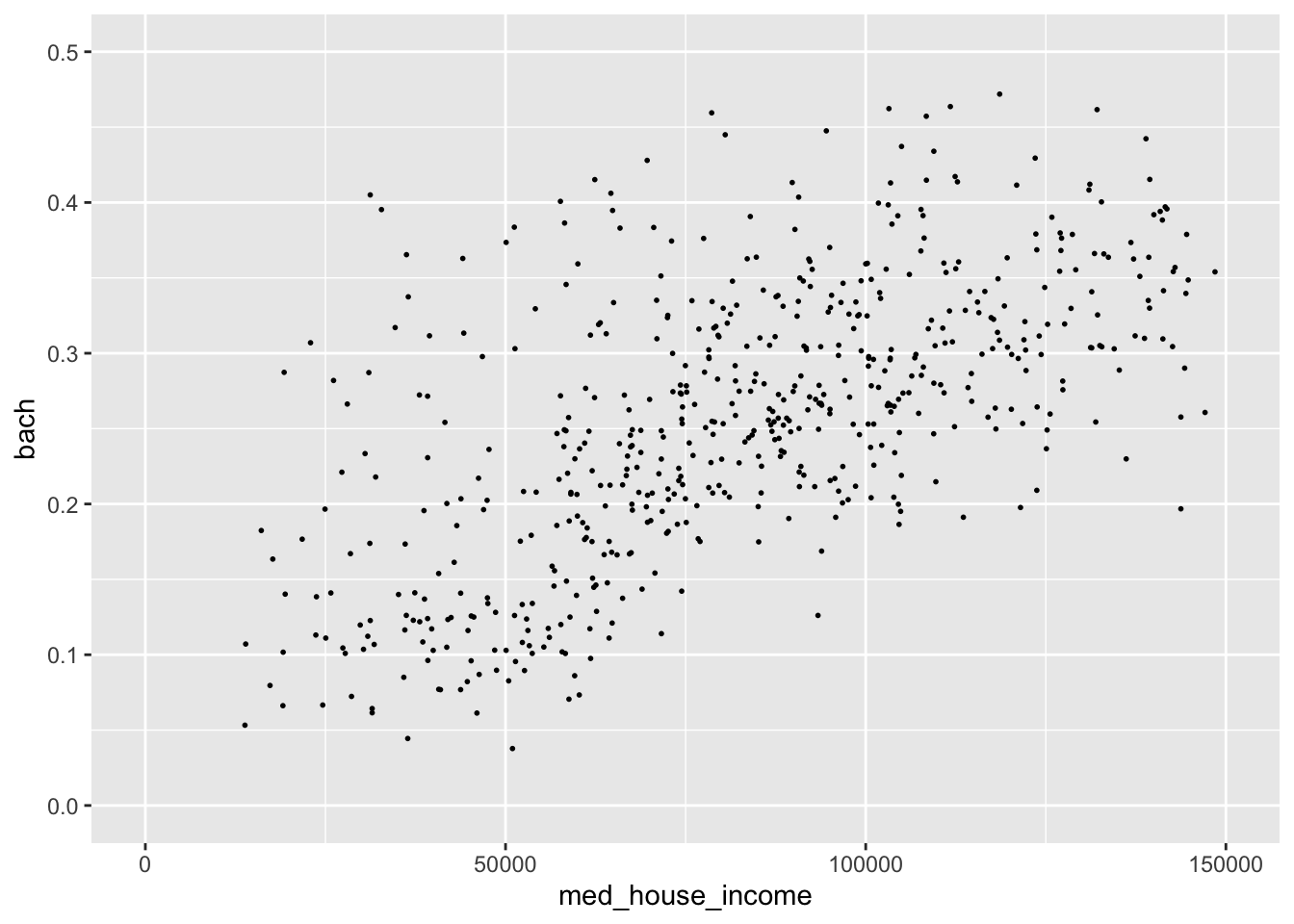 By changing the extent of our axes this relationship seems much more robust! Such a visualization could spur further validation of this ACS data.

Remember, ACS data come from samples and sometimes those samples are small. Because of these small sample sizes, we may very well get values that are not properly representative. It is on you to decide whether or not you should include or exclude the values!

The plots we create, while lovely as they are, are somewhat lacking in the labeling department. I would put money on it that no publication would accept plots with labels such as the ones above for sole reason being that our axes titles and scale labels are hard to interpret.

We’ve already used it before but to be extra clear, to add titles and axis labels to our plots (not adjusting the scale labels) we use a labs() layer. With labs(), you can label any aesthetic you have mapped as well as adding a title, subtitle, caption, and a tag.

Let’s add some titles and labels to our plot. 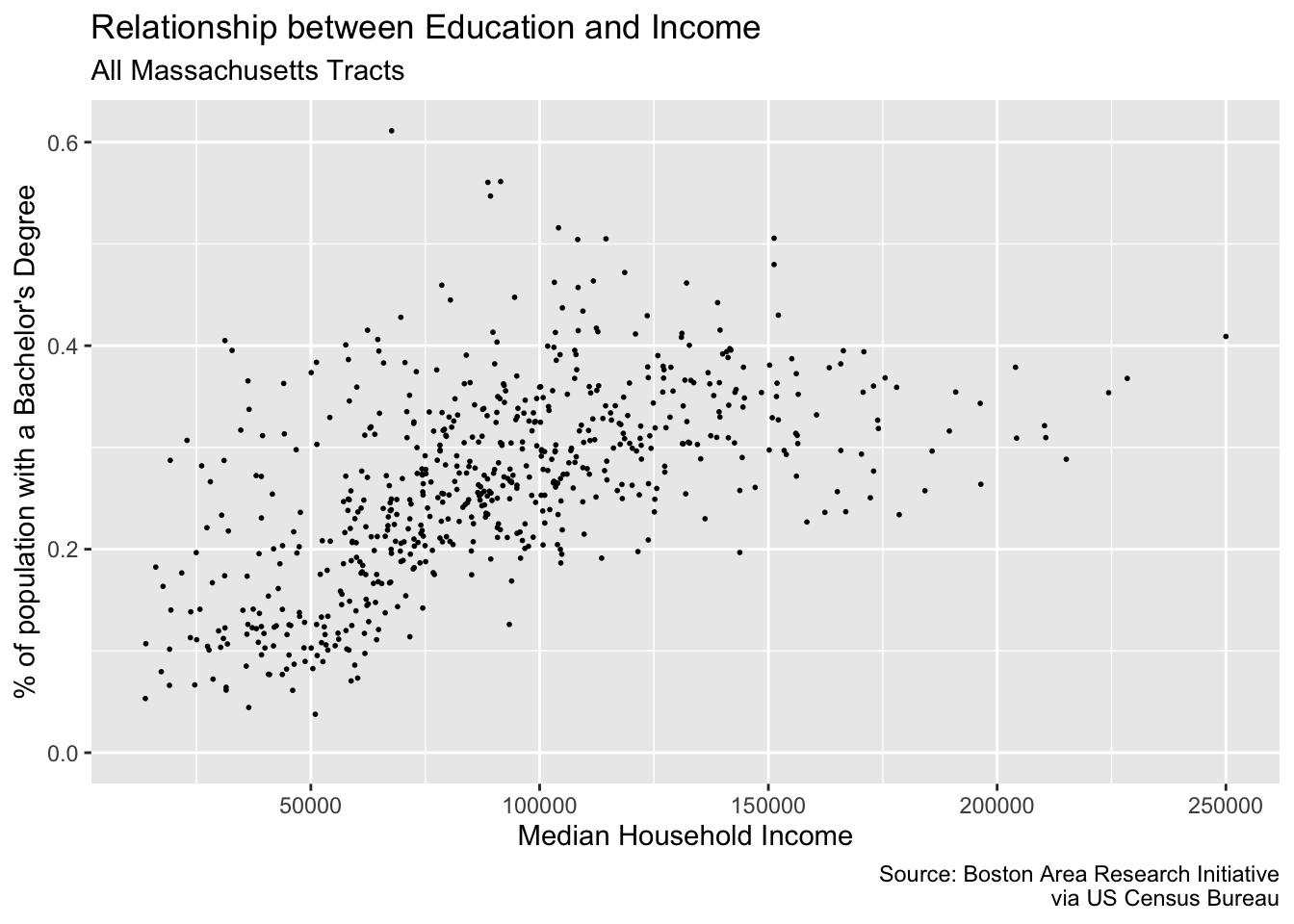 Friends, it’s looking pretty good. But there are just two more changes we need to make: our axes labels! The x and y axes labels are meant to illustrate dollar amounts and percentages but respectively. To change the scale labels. we will use some helper functions from the package scales

{scales} provides handy functions for taking a variable and altering the labeling to match some other format. In our case, we are interested in printing our med_house_income as in a dollar format, i.e. 2000 becomes \$2,000, and bach as a percentage, i.e. .4 becomes %40. To alter our labels we will use scales::dollar(), and scales::percent() respectively.

Isn’t it nice how well named functions can be sometimes?

To produce the examples outlined above we would call the function as such:

Now we have an understanding of how the function behaves, but where do we actually change the labels? This is where we come full circle back to our scale_*_continuous() layer. As we mentioned earlier, ggplot() will handle making the scales for us. But ggplot() doesn’t know how we want to label our variables or how they should appear on the axes. And now the impetus is on us to make these changes manually. To change the axis labels we will specify which axis we are altering using the proper scale layer—i.e. scale_y_ or scale_x_. Then, in each layer we set the labels argument to the respective labeling function we want—e.g. scales::percent and scales::dollar.

Note: If you append parentheses like you normally would you will get an error. This case we want to ignore them because when they are present, R will try to evaluate that function. Rather, we are interested in providing the function object to the labels argument rather than provide it with a vector of output. 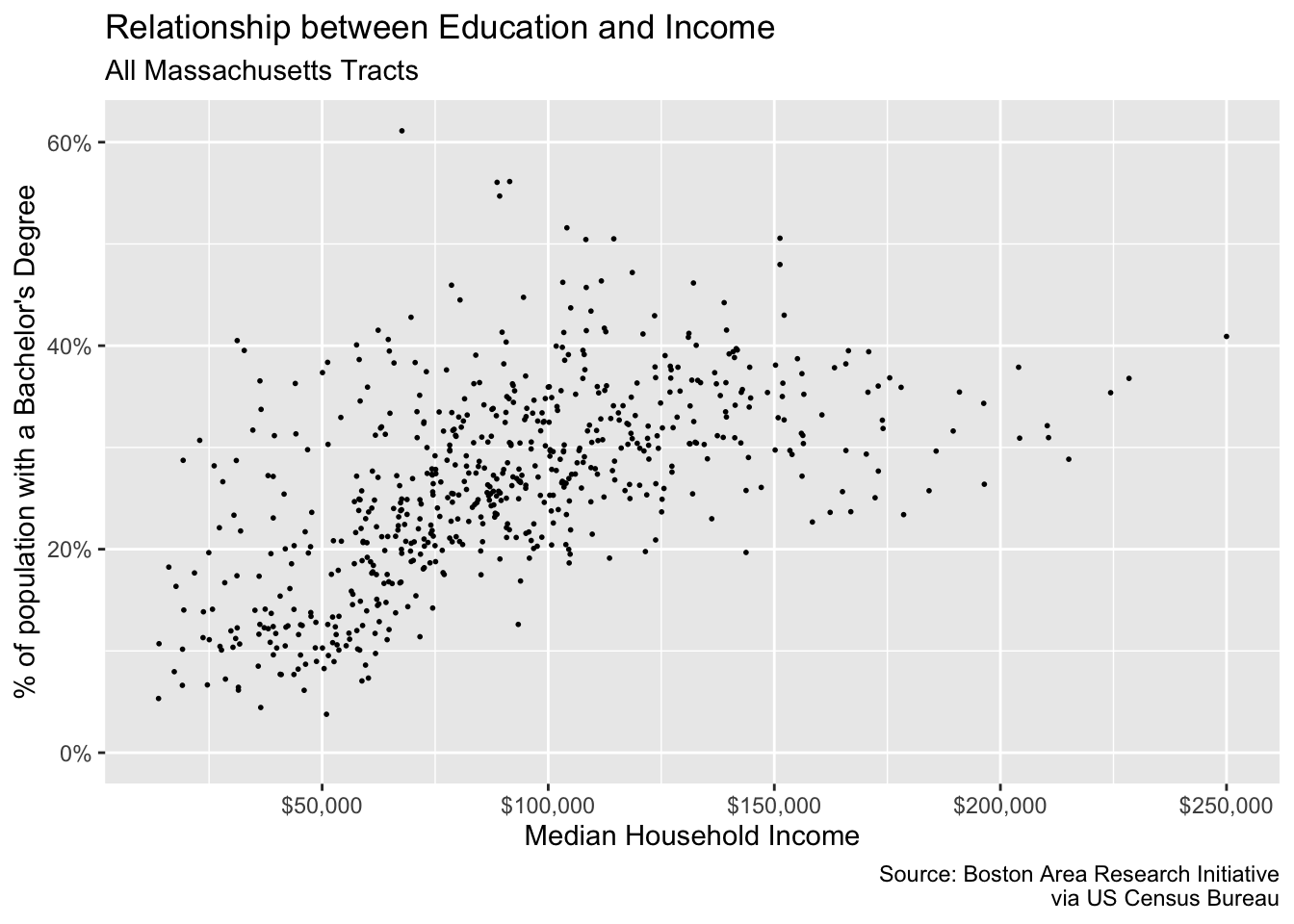 In addition to being able to control the defaults, the layers, and now the scales you are well equipped to create and manipulate your own plots.

While you’re likely to create 98% of your visualizations without ever manipulating the coordinates, it is still good knowledge to have!

As we have mentioned and alluded to, we are working in a two-dimensional space—meaning with x and y coordinates. When working in two-dimensions, the Cartesian plane is the natural choice for a coordinate reference system. In all of our plots, this has been the default. Behind the scenes, ggplot is essentially adding a coord_cartesian() layer to your plot.

Think of this much of the same way that your scales are inferred.

If, however, we find the need to alter or manipulate the coordinate system the tools are available to us. We’ve actually already used one, coord_flip(). Like, with scales, all coordinate based functions are prefixed with coord_(). If you will need to use these coordinate layers, it will be to essentially change the aspect ratio of your plots.

We will encounter coordinates much more when we talk about spatial data. For now, though, all you need to know is that they exist and are a major underlying part of your plots.

The last portion of the grammar to visit is faceting. When we facet a plot we are creating what are called “small multiples,” a term coined by the prominent Edward Tufte. A faceting, in other words, creates a graph for each unique level in a categorical variable. Think of this like a group_by() for plotting.

There are two types of faceting we can do: wrapped and grid. These are done with facet_wrap() and facet_grid() respectively. The reference documentation sums up the differences best:

“facet_grid() forms a matrix of panels defined by row and column faceting variables. It is most useful when you have two discrete variables, and all combinations of the variables exist in the data. If you have only one variable with many levels, try facet_wrap().”65

Let’s look at facet_wrap() first. To create the faceting, we need to add facet_wrap() as a layer to our existing plot. There is only one argument that we are required to fulfill and that is the facet argument. facet expects a set of variables defined by the vars() function. vars() is a function used throughout the tidyverse to specify which columns are to be referenced used within the context of a the function it’s being used in.

To recreate the above plot but faceting by county, we would add facet_wrap(vars(county)) as a layer to our plot. 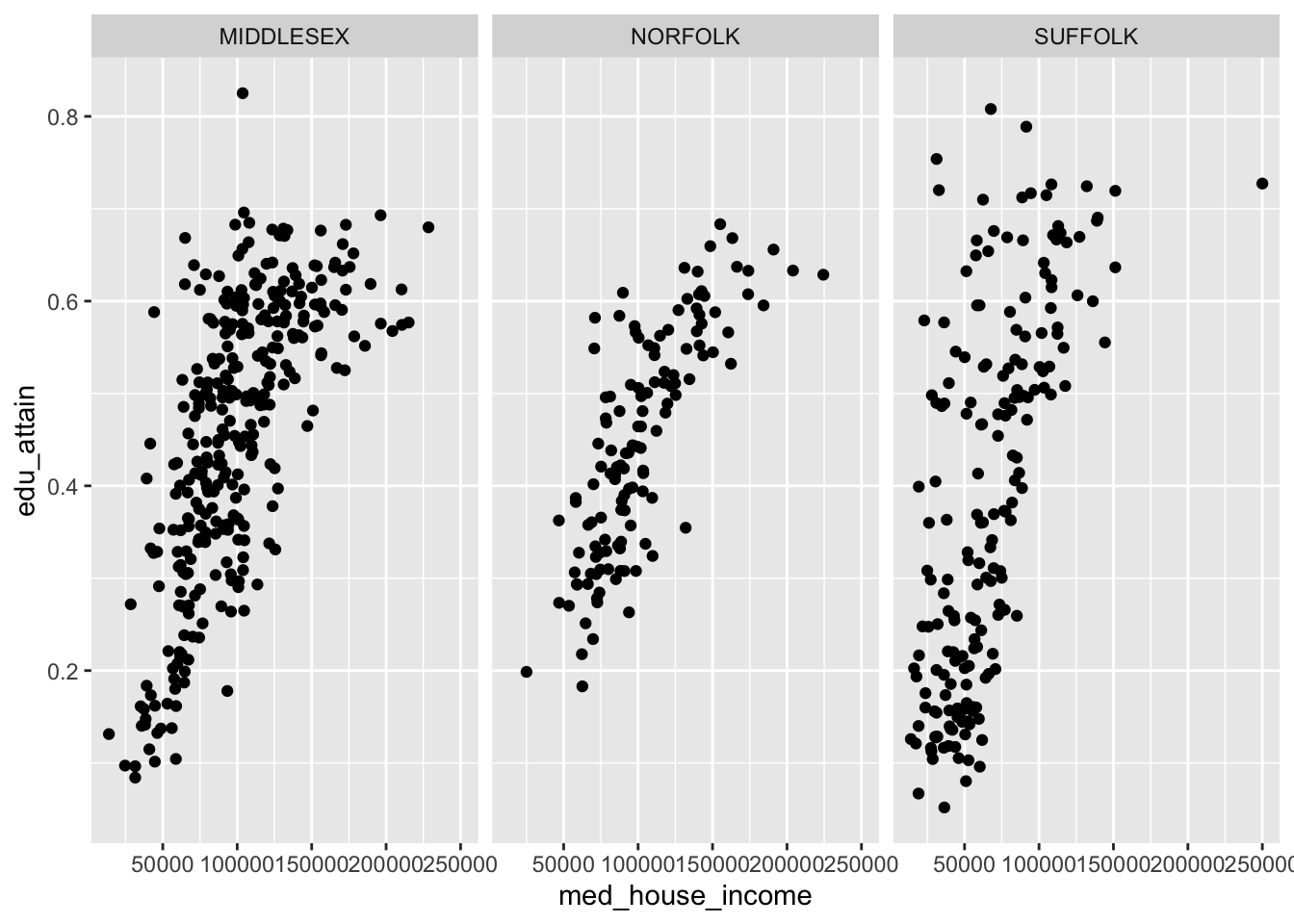 With facet_wrap() we are able to explicitly state how many rows or columns of plots there should be. The defaults may be nice, but it’s always good to be explicit about our expectations! We set the nrow or ncol argument to do this. Since our above example defaulted to ncol = 3, let’s try this with three rows. 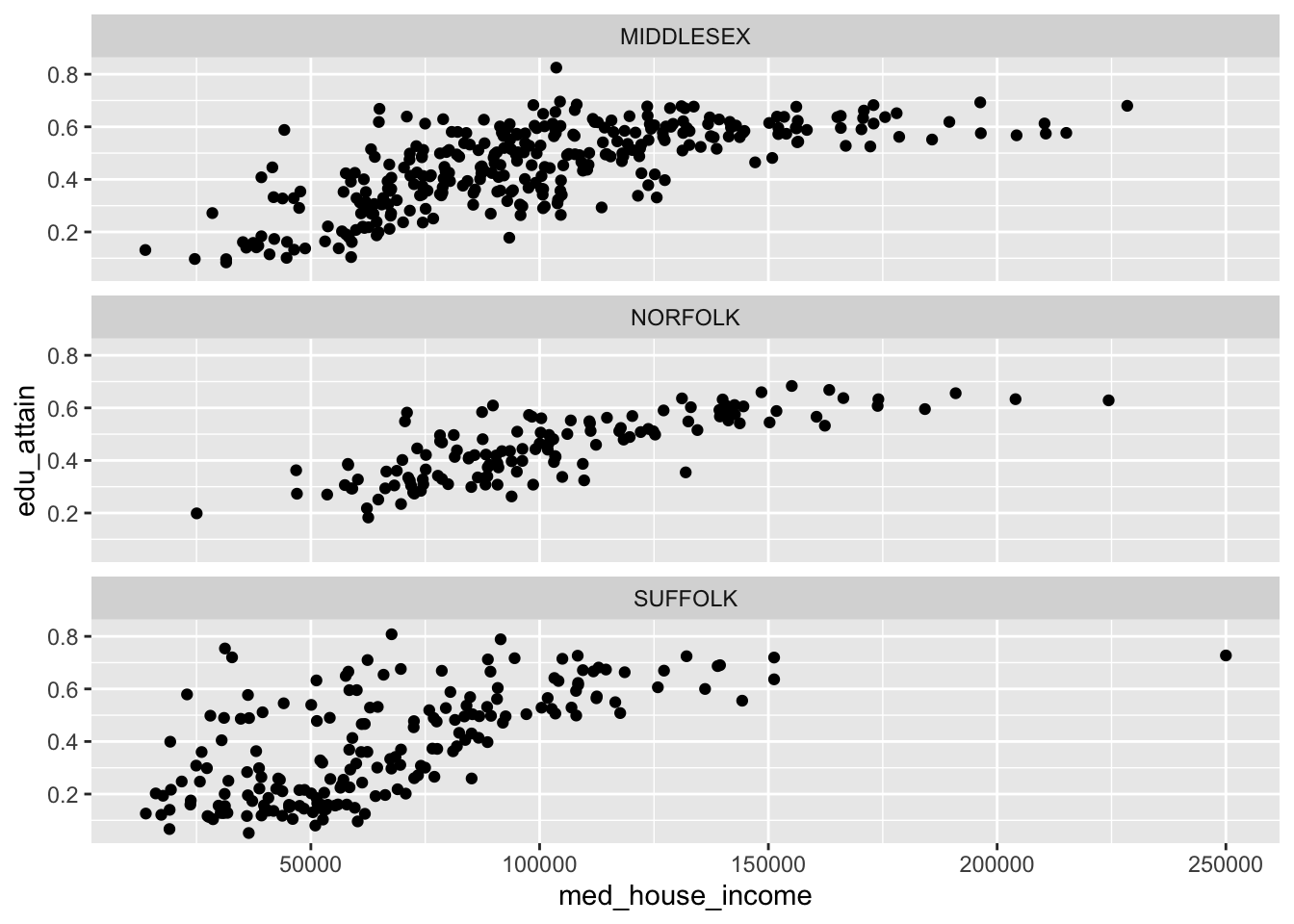 The grid works a little bit differently. Rather than specifying which columns to facet on and the number of rows or columns, we can create a grid (or matrix) of small multiples. With facet_grid() we use the rows and cols.

We can recreate our above graphs by passing vars(county) to either rows or cols. But where facet_grid() shines is when you have data in every pairing of two categorical variables. For example we can we create a facet for each combination of county and hh_inc_quin. 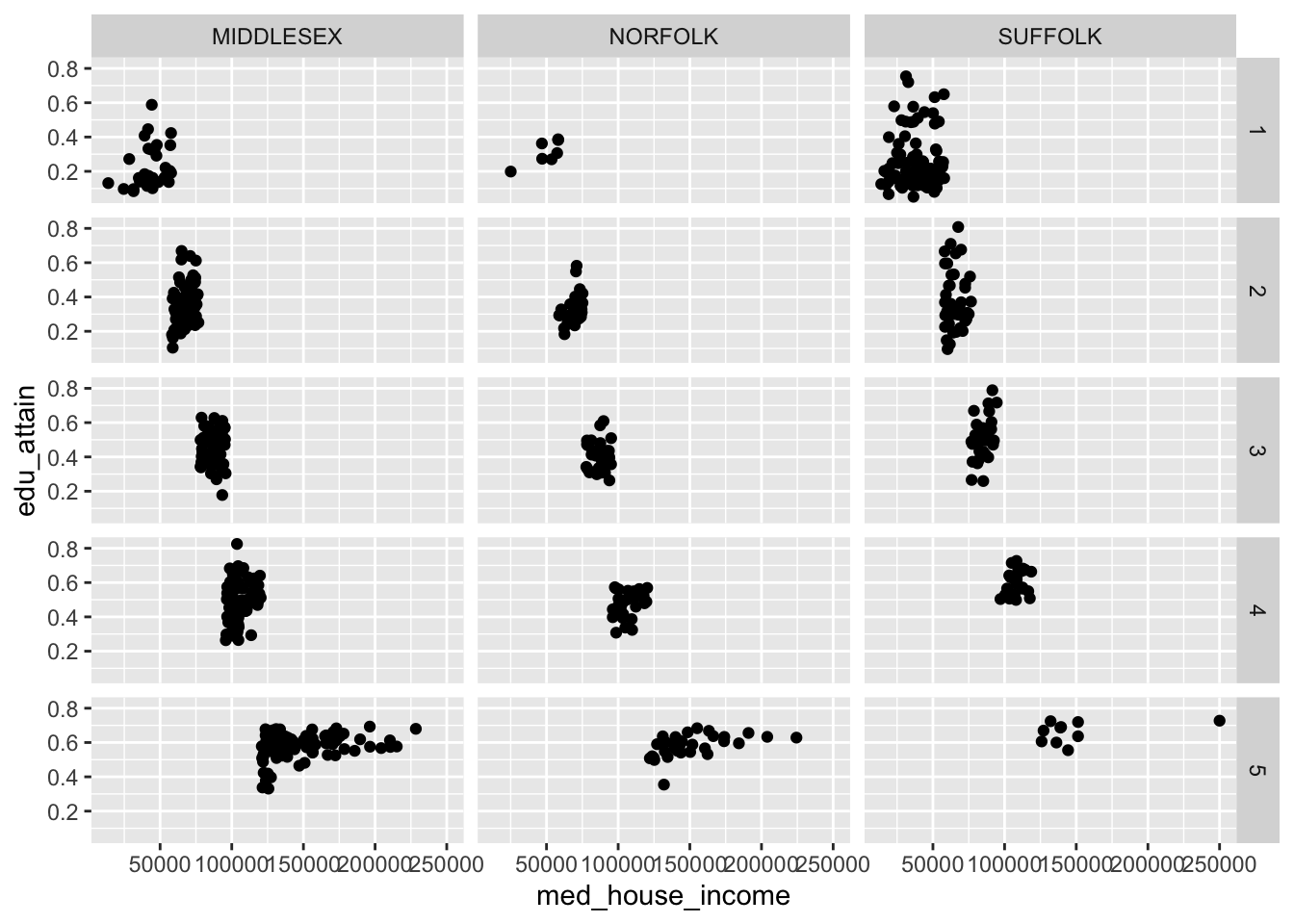 When we create facets, each panel has shares the same scales. We can change this by setting the scales argument to one of "free", "free_x", or "free_y". These in essence, “free up” the scales for each panel. We can choose to share the scales on the x axis by setting scales = "free_y" or vice versa. 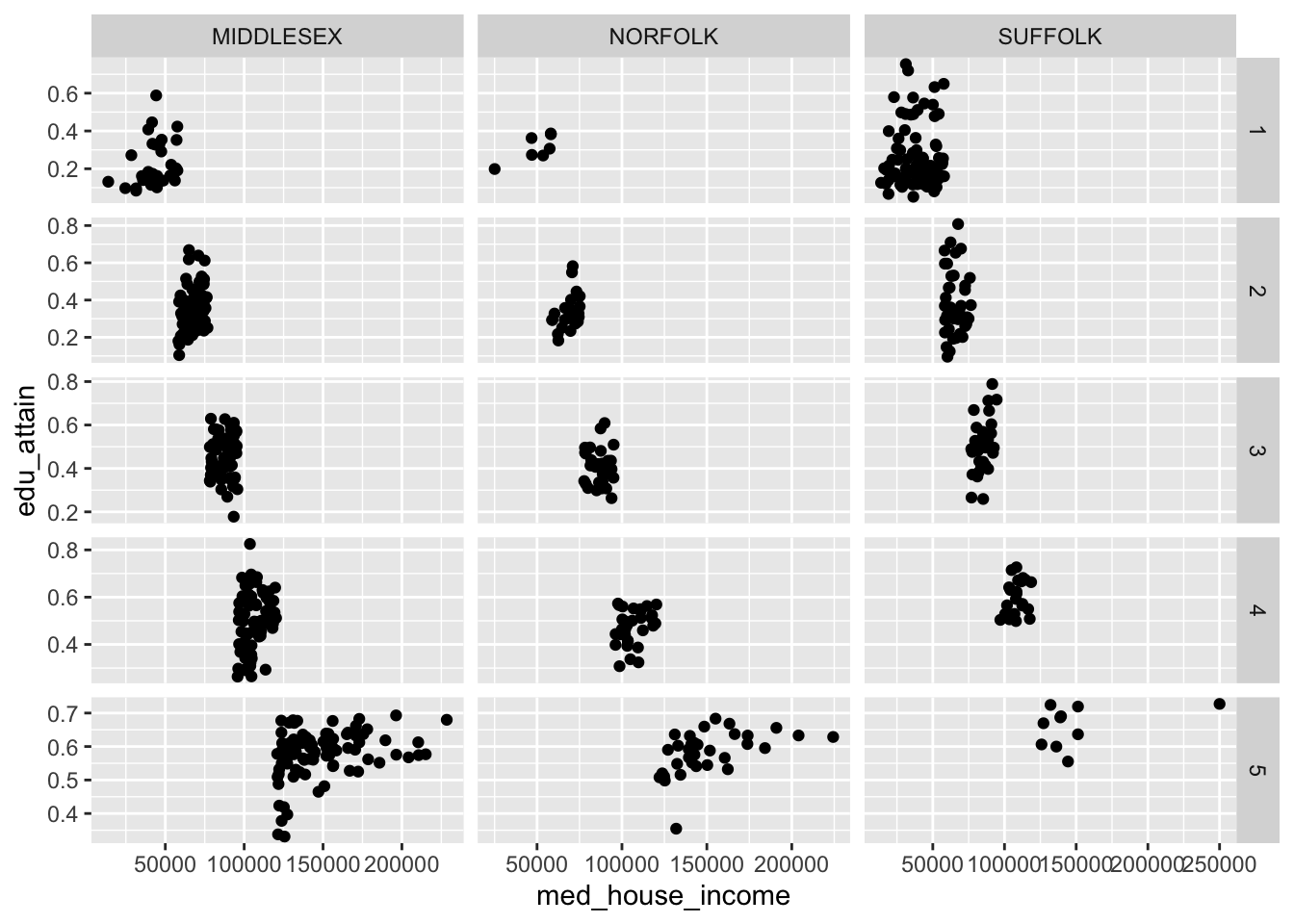 It is also important to note that what we have gone through is by no means exhaustive. You should, at minimum, familiarize yourself with both scale_*_reverse(), and scale_*_binned() in your spare time. There are dozens, if not hundreds, of ggplot2 functions to suit your every whim. And, as you have already briefly seen, the ggplot function universe is not relegated to just ggplot2. There are many other packages which have built custom geoms and other enhancements that may benefit you.